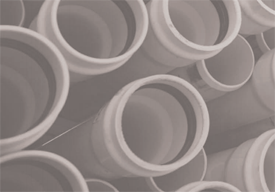 Maintaining and improving infrastructure—roads, bridges, tunnels, sewers, water supply, etc.—is a fundamental charge of states, cities, and localities. Whether it’s replacing leaky pipes or repairing roads, choosing the products and materials to get the job done comes down to cost and performance. Taxpayers understand this; it’s the same choice they have to make when repairing a roof or fixing their own plumbing. So for public projects involving piping, it comes down to this: what material will get the job done, meet all applicable standards, and save taxpayers money?

And there’s a lot of money to be saved! In 2014, a city in North Carolina was preparing to undergo an infrastructure improvement project that involved replacing two current waterlines. In preparation for the project, the city prepared and published a cost analysis of two different materials that could be used to replace the lines: PVC (polymerized vinyl chloride) pipe and iron pipe. The city’s analysis showed that using iron pipe would cost an average of 30% more, according to this 2014 report prepared by Dr. Steven Folkman of the Utah State University College of Engineering. Furthermore, the report concluded that PVC pipecould provide tens of thousands of dollars in taxpayer savings.

A driver needing a new set of tires doesn’t get offered one choice of tire; she gets offered a range of cost and performance options. When it comes to piping and infrastructure improvements, taxpayers deserve the same.