Flexing Your PEX: Plumbing the possibilities of cross-linked polyethylene pipes 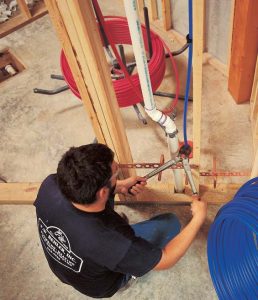 These qualities could make rusty plumbing pipes a thing of the past for many homeowners. By its very nature, PEX plumbing pipe neither pits nor corrodes. Corrosion is an electrolytic process, requiring the presence of electrically conductive materials. Polyethylene, on the other hand, is a dielectric material—it can be used as an insulating material for electrical conductors—and its role as a non-conductor makes corrosion a scientific impossibility. PEX pipe’s smooth interior walls also make it resistant to mineral buildup (i.e. scaling) when used with both hard and soft water. Without special treatments or additives, its water maintains consistent pressure and flow over long periods. PEX is also resistant to notching and abrasion, and helps minimize noise transmission. When used in piping, the material is especially quiet, thanks to its flexibility and ability to absorb pressure surges. (More rigid piping materials are susceptible to water hammer noise, which can be heard throughout a structure.) The majority of PEX tubing is manufactured per the following standards:1 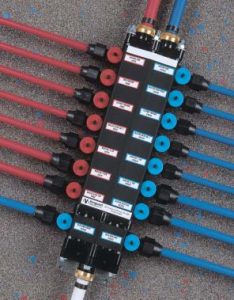 One of the biggest advantages of PEX plumbing stems from how easily the material lends itself to parallel (or ‘manifold’) systems, which eliminate hidden, interim connections and also offer reduced overall pipe sizes, increasing water and energy efficiencies.2 According to a National Association of Home Builders (NAHB) Research Center study, when used with a centrally located demand heater, this type of system can offer 17 percent to 35 percent annual hot water energy savings (as further explored later in this article).

The lightweight 32-mm (1.25-in.) diameter thermoplastic manifolds are easily connected to main service/fixture lines. Shutoff valves are built into each port for individual control of lines and individual fixture flow. Since fewer fittings are required (compared to rigid plumbing), the systems can use 9.5-mm (0.4-in) supply lines for individual fixtures.

Plumbing manifolds are mounted in accessible locations such as basement walls or service closets to allow access for shut off to individual fixtures. However, while the thermoplastic manifold must be near the water heater, a 914-mm (36-in.) vertical and 457-mm (18-in.) horizontal space separation is recommended. (Opposing port manifolds can be mounted between stud framing.)

Copper can be used for the main line into the house and, with slab-type foundations, for underground lines on the first level. Special fittings allow PEX water lines to attach directly to the copper, with the tubing sliding over the fittings, and a metal collar crimped to seal the connection. PEX pipes also can be used under concrete slabs, but they tend to move before/during concrete placement. 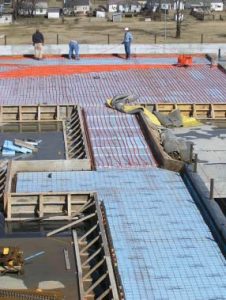 PEX piping is installed with only two fittings per line—one at the manifold and one at the fixture’s transition fitting. A single length of piping can run directly from a manifold through studs and around obstacles to the fixtures, before being secured with clips and cut.

The major advantage of parallel systems to home/building owners lies in their ability to allow the simultaneous use of several fixtures without major pressure/temperature changes. By reducing supply plumbing, the systems also help increase water velocity and help deliver hot water to fixtures quickly—this, in turn, conserves water otherwise wasted when users run the tap, waiting to achieve an ideal temperature.

Additionally, heat loss may be less a factor with PEX since plastic has better thermal insulating properties than some traditional plumbing materials. Maintenance is also relatively simple with plastic manifolds because the valves allow individual fixture control, shutoff, and maintenance. 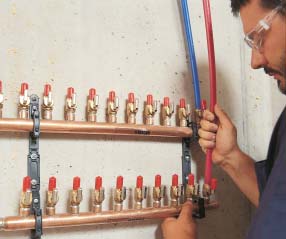 In many cases, the pipes in a building the last thing the water touches before someone has a drink. PEX’s inability to corrode is obviously a big factor in making it a desirable material for drinking water safety. Additionally, the material is resistant to leaching, pitting, and mineral buildup.

Given these benefits, some may be surprised to see the technology has not achieved instant acceptance into mainstream building practices. One misconception is some PEX pipes can become stiff and difficult to use in low temperatures. However, standards such as ASTM F 1960, Standard Specification for Cold Expansion Fittings with PEX Reinforcing Rings for Use with Cross-Linked Polyethylene (PEX) Tubing, and ASTM F 1807, Standard Specification for Metal Insert Fittings Utilizing a Copper Crimp Ring for SDR9 Cross-Linked Polyethylene (PEX) Tubing, address cold weather durability.

Compared to its rigid counterparts, PEX requires more piping—a factor adding to up-front material costs. The use/handling restrictions associated with plastic pipe installation require proper training, as well as site supervision. Not all PEX piping is compatible with the manifold systems discussed above, and special piping installation equipment may be needed. Finally, the very nature of manifold systems require additional planning at the design stage as the A/E must determine the best locations and most efficient way to route PEX branch lines.

PEX piping has been incorporated into several projects as part of the U.S. Department of Housing and Urban Development’s (HUD’s) Partnership for Advancing Technology in Housing (PATH) field evaluations, such as, the 2001 installation at Oakwood Homes’ Green Valley Ranch residential development in Denver, Colorado. In an article posted on Toolbase (the NAHB Research Center’s residential construction information site), Paul Koch, principal of Paul Koch Plumbing explains his crew was trained by a PEX pipe manufacturer’s representative and via a visit to a site where the system had been successfully installed.3

Koch’s crew initially had difficulty drilling holes in the stud adjacent to the manifold in exact alignment with the outlets, however they overcame this problem simply by drilling larger holes.

According to Oakwood’s Don Carpenter, his team began using the plastic plumbing manifold with PEX in the summer of 2000, after hearing of reduced labor (and, in turn, a shortened construction cycle time) and decreased long-term costs. The Green Valley project used open web joists, which increased framing material costs, but allowed for easier installation, as it eliminated the need for drilling or knocking out holes. Carpenter says the open web joists provided plenty of room for running pipe as well as wire and ducts.

The crew found waste/vent pipes should be installed before the PEX to prevent damaging the tubing with epoxies. They also recommended flushing the main supply from the street before running water through the manifold to rid sand/dirt from the street line. To ease overhead work, the crew used stilts normally used by gypsum wallboard contractors. For the Oakwood project, trimming out the plastic plumbing was similar to a conventional system. Since many fixture locations were fitted with copper stub-outs during the rough-in process, their connection was no different than from conventional methods. However, at locations without the stub-outs, the process was somewhat different. During the rough-in stage, these pipes were left long so they would extend all the way to the bottom of the faucet. At trim-out, a special proprietary compression type fitting was crimped to the pipe end and attached directly to the threads of the faucet. Since the manifold was connected during the rough-in process, the system was ready to use once the fixtures were connected. 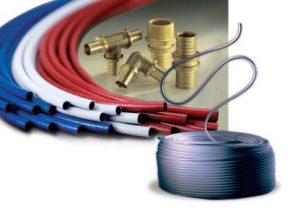 Installers should refer to the minimum bend radius guidelines in their manual, taking care not to cut or kink the PEX tubing. There are also couplings and fittings for repairing damaged tubing or handling a directional change beyond this radius.

The NAHB Research Center’s Performance Comparison of Residential Hot Water Systems examined estimates of energy savings for various hot water systems through weekly testing and annual simulations.4 The report is based on a study measuring the energy performance of copper piping in a tree configuration and a PEX alternative in a parallel configuration, employing both an electric storage tank heater and a demand (i.e. tankless) system.

Using the Transient Energy System Simulation Tool (TRNSYS), an energy consumption model for each hot water system was calibrated with heat-transfer coefficients determined by experimental results.5 Annual simulations showed a 12-percent increase in overall system efficiency in high-use homes employing the demand water heater with PEX parallel piping over the storage tank with copper piping, and an increased efficiency of 26 percent in low-use homes. Once each system’s total output energy had been normalized, the electrical savings of the demand water heaters with parallel piping over the standard copper tank/tree system was 34 percent for low-use homes and 14 percent for high-use ones.

However, improving a water-heating system’s efficiency has further reaching sustainable benefits than simply reducing electricity costs. Since the time needed to run the fixture for achieving a desired temperature has been reduced, the volume of wasted water also could be lessened. Similarly, water could be saved in PEX parallel systems as brief, unintentional uses of hot water (i.e. single-handle faucets accidentally set in an incorrect position) should be eliminated by demand heaters that do not activate at low flow rates.

The joy of PEX

Industry professionals are not the only ones becoming attracted to PEX. General interest guidebooks and non-professional construction resources have increasingly been touting PEX’s advantages as a piping material. Stanley Complete Plumbing says, “The supply pipe of the future may already be here… PEX is an installer’s dream. It is easily cut, and it is flexible enough to make gentle bends around corners… PEX is an ideal material if you want to replace old galvanized pipes because it can be snaked through walls.”6 Big box giant Home Depot’s mass market-targeted Plumbing 1-2-3 calls PEX “an ideal choice,” citing its “good resistance to deterioration, heat, and the high pressure required for supply, plus ease of assembly.”7 “Along with these amateur builders, as more construction/design professionals explore the possibilities of cross-linked polyethylene, the system’s long term benefits will be realized.”

In addition to indoor plumbing and radiant floor heating systems for smaller (non)residential construction projects, cross-linked polyethylene (PEX) piping is suitable for quite a few other applications. As standards continue to be developed and new manufacturing techniques explored, the use PEX is growing.

Snow/ice melting
PEX pipes could be used to create a hydronic system designed to enhance ice and snow removal. Circulating a heat transfer fluid (for example, an anti-freeze and water mixture) through the PEX pipes can reduce indoor/outdoor maintenance costs, and potentially help reduce financial liability.

The growing season of natural grass surfaces could be extended through the installation of PEX piping within the turf’s soil layer. The fluid is circulated at varying temperatures to gently warm the roots, which would help provide optimal root zone temperature.

Camille George Rubeiz, PE, is senior director of engineering for the Plastics Pipe Institute (PPI), and is a member of both the American Society of Civil Engineers (ASCE) and American Water Works Association (AWWA).

2 While more rigid piping materials can be used in manifold systems, the labor-intensive fittings can make this application impractical and expensive.

4 The 2001 study is a continuation of past Renewables and Energy Efficiency Program (REEP) technical efforts sponsored by the National Renewable Energy Laboratory (NREL). It can be accessed here: Performance Comparison of Residential Hot Water Systems

5 For more information on the simulation program, visit www.trnsys.com.