How Do You Build a Hurricane Resistant House? 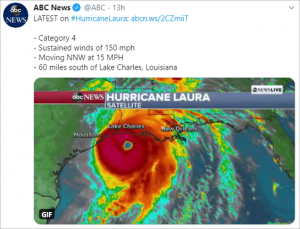 Extreme-weather events have become more frequent in recent years across the United States. In August 2020, Hurricane Laura struck the Louisiana-Texas coast with 150 mph winds. It was a reminder of recent hurricanes — from Sandy in 2012 to Michael in 2018 – whose high winds, driving rain and surge waters caused severe damage to buildings and infrastructure in U.S. coastal areas. And tornadoes have battered many parts of the nation’s interior, notably an outbreak in May of 2019 that generated nearly 400 tornadoes across the Great Plains, Ohio Valley, and Northeastern states.

Recent super-storms completely shattered many traditional, “stick-built” houses that could not endure the stresses imposed by winds exceeding 150 miles per hour — or the debris tossed by those winds. The scope of the damage has caused architects and construction engineers to re-examine building materials, to learn which can best produce resilient homes able to withstand the wind and water of natural disasters. 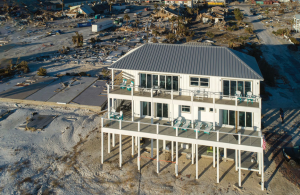 In hurricane-prone areas, building above the expected storm-surge water level is one of the most important lessons learned. For existing homes, raising vital systems such as HVAC, electrical, and telecommunications above flood-plain level is essential. The ideal, however, is to design the entire structure up and out of harm’s way. One home in Mexico Beach, Florida, became famous for surviving Hurricanes Matthew and Irma while nearby homes were washed away. Homeowners Russell King and Lebron Lackey went beyond existing code requirements — they built their Sand Palace house on steel-filled concrete pillars 12 feet above ground level and anchored those pillars in a concrete foundation some 28 feet underground.

Protecting a building’s roof is vitally important in any high-wind storm. That’s because the roof not only protects the occupants and belongings, it’s subject to severe upward stress by varying pressure as the wind blows around a building. What’s needed is to direct the wind’s energy away from the roof and walls, down toward the foundation. A range of products is available to anchor typical wooden-roof trusses and rafters firmly to supporting walls, including steel hurricane roof-clips and -plates, and metal tie-down straps. Such upgrades are relatively inexpensive, and with them a typical roof should be better able to withstand most hurricanes and tornadoes. Spray polyurethane foam (SPF) is often applied on roof undersides to help prevent air penetration and to function as a “glue” to strengthen roofing components. The roof of the Sand Palace house, for instance, received six inches of closed-cell SPF. 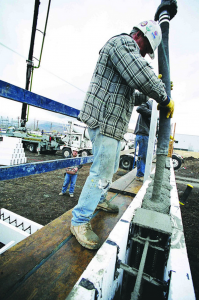 Regarding walls, newer technologies are proving resilient to extreme weather, while also adhering to sustainable-design principles. The goal is to build walls capable of flexing in strong winds without shattering, while keeping out moisture and raising energy efficiency.

Insulated concrete forms (ICFs) are one increasingly popular building material in storm-prone areas. ICFs are interlocking blocks, consisting of foam plastic insulating panels that are filled with concrete on-site. The blocks form a solid, impact- and water-resistant structure, while also providing fire resistance and energy-saving insulation. An ICF structure helped the Sand Palace on Mexico Beach to resist hurricane winds of over 150 miles per hour.

Structural insulated panels (SIPs) are another new technology that’s been used in many homes which have successfully weathered recent hurricanes. The panels sandwich an insulating foam core (usually polyurethane) between structural facings such as oriented strand board (OSB). When reinforced with steel, the finished panels are extremely strong and energy-efficient. Like ICFs, they offer increased R-value insulation and greatly reduced air leakage when compared with many traditional building materials. In addition, both SIPs and ICFs are largely prefabricated, allowing rapid assembly once delivered to the construction site. 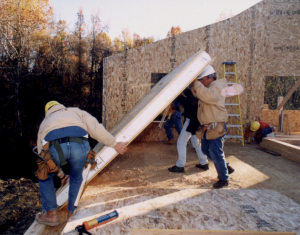 Solid, strong walls will make any house more resistant to wind and rain, but without windows, a house is less inviting and enjoyable. Yet these important openings are some of the areas most vulnerable to extreme weather. Protecting windows from wind and debris is the first step. Though it’s typical to see videos of residents covering windows with pre-cut plywood panels as storms approach, many find hurricane shutters more convenient and resilient. Shutters are available in a variety of styles from folding to rolling and accordion. Some are available in durable, low-maintenance vinyl or polycarbonate plastic.

Windows must be strong enough to resist both wind and what the wind throws at them. Once a powerful storm begins to break windows, it’s likely the increased air pressure will blow off the roof and collapse much of the building. What’s often relied upon to mitigate such risk is reinforced glazing used in “impact windows” designed to meet or exceed building code. Impact windows sandwich plastic film between two pieces of shatter-resistant glass. The sandwich structure also improves insulation, reduces outside-sound transmission, and blocks UV radiation from entering the home. Vinyl-framed impact windows combine excellent insulation with low maintenance and cost.

While there’s much to consider when designing and building disaster-resistant homes, the areas discussed above are some of the most important. Architects and builders are busy developing many new construction methods and materials to provide strong structural integrity while also reducing environmental impact, building and ownership costs.

Let’s Drive Down Greenhouse Gases by Upgrading Our Building Insulation