The following is a Professor Plastic article, originally printed on PlasticsMakeItPossible.com. 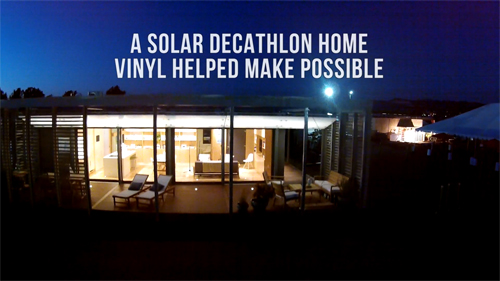 Hurricane Sandy was devastating. Many communities and homeowners up and down the East coast are still recovering.

But in its aftermath, an inspiring team of students from a college in Hoboken, NJ—just across the Hudson River from lower Manhattan—came up with an idea to help weather the next big one.

First, let’s recall how bad Sandy really was. The Stevens Institute of Technology, home of the collegiate team, provides a good synopsis:

“At nearly $70 billion, Superstorm Sandy was the second-most costly storm in U.S. history, trailing only Katrina. Some 650,000 houses were destroyed, more than 40 New York-area residents perished and at least six local hospitals were forced to shutter and relocate patients during the height of the worst weather. Coastal towns were submerged, boardwalks washed away. Homes, businesses and a five-story-tall roller coaster floated off the Jersey Shore.”

Taking a cue from the Institute’s maritime expertise and “inspired” by Sandy, the Stevens team designed and built a house for the 2015 Solar Decathlon, the U.S. Department of Energy’s contest among universities to build solar-powered houses that are “affordable, energy-efficient, and attractive.” The students leveraged proven technologies, some borrowed from boat building, to create a house designed to withstand a hurricane.

What are many boats built with that keeps water at bay? A lot of plastics and plastic composites. And so is the Stevens team’s house. The walls, the roof, the storm shutters, the window frames, even the flooring and decking are made with plastics and plastic composites to create a water-resistant shell to help push back wind, debris, and seawater, allowing for faster recovery from flooding and storms.

The team members chose tough, durable plastics precisely because one of the driving motivations was the need for resiliency. They first identified the materials used in those hundreds of thousands of homes that typically did not hold up against Hurricane Sandy. And then they identified materials that should.

And they didn’t stop at resiliency. Another driving motivation was sustainability. So they chose efficient appliances and insulation products made with plastics that reduce energy use by 90 percent compared to the average New Jersey house. To provide power, including when the grid is down after a storm, they installed flexible thin-film solar cells that replace typical heavy glass layers with slim layers of plastics.

So what’s the result of this marriage of SUstainable and REsilient? SU+RE or the SURE HOUSE, conceived as the “coastal home of the future,” a cost-effective prototype for shore communities.

It started with a simple question: “how can we design a home which both reduces its energy use and adapts to the realities of a changing, more extreme climate?” The answer resulted in a net-zero energy, storm-resilient coastal beach cottage with the latest renewable energy technologies, built from plastics and other materials repurposed from the boating industry.

Oh, and guess what? The Stevens Institute of Technology’s SURE HOUSE won the Solar Decathlon, placing first place in seven out of ten criteria of the contest.

“Inspired” by a superstorm. Built for sustainability and resiliency. Potentially a model for future shore homes. And the role of plastics? A big one, you can be SURE.