This article was originally printed in Retrofit Magazine.

Downtown Cleveland’s theater district, known as Playhouse Square, is a set of nine performance venues that form the second largest performing arts center in the U.S. Its impressive history dates to the opening of the first five theaters in the 1920s. Currently, the buildings and venues of the Playhouse Square district are seeing growing interest, thanks in large part to recent urban revitalization taking place in the city’s downtown, including substantial renovation and restoration projects on Cleveland’s impressive collection of pre-World War II buildings. This includes the National Register of Historic Places-listed Hanna Building and Annex, which is the home to the 1921 Hanna Theatre and site of some of the most recent upgrades and renovations in the Playhouse Square area. But while the renovations at the building are more recent in the district, the buildings now benefit from a trusted product that has been a staple in the restoration and preservation of the area’s historic gems for the last four decades, versatile spray polyurethane foam (SPF) insulation. 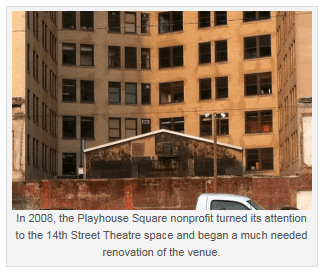 Today’s Playhouse Square district is a textbook example of historic preservation and reuse, by protecting the district’s five original theaters and incorporating new performance areas and complementary restaurants and businesses into the mix. It was a project that almost did not happen, as the shuttering of four of the five original venues in the late 1960s left only the Hanna Theatre open and the future of the buildings uncertain. Fearing the destruction of these cultural landmarks was near, in 1973 a group of local advocates, leaders and businesses formed the nonprofit Playhouse Square, an association taking its name from the district. Supported by donations, private-public partnerships and membership dues, the new non-profit went quickly to work, obtaining long-term leases for the closed Palace, Ohio and State theaters and beginning the laborious task of restoring and upgrading the infrastructure in those buildings, launching the largest theater restoration project.

Intermission for the Playhouse Square District

With most of the historic Cleveland theaters having closed in the late 1960s, and age and neglect having set in even prior to the doors being shuttered, nonprofit Playhouse Square’s three original theaters were in need of extensive renovations by the time the association took possession of them in the 1970s. This included the roofs, which were especially showing their age and are vital to protecting the integrity of the buildings and venues they cover. The nonprofit group realized they needed a durable waterproofing solution for the roof systems, as well as a versatile insulation option that worked around the renovations that had been made through the years.

From early on, nonprofit Playhouse Square’s founders decided to find ways to maximize energy efficiency and selected SPF as the single roofing solution for the three historic buildings. SPF is a spray-applied insulator that is made by mixing liquid components onsite to create an expanding foam. When properly sprayed by a trained professional contractor, SPF expands to form a continuous moisture and air barrier that fits around gaps and joints. After making initial structural upgrades and repairs to the roofs of the buildings, the SPF insulation was applied as a top layer.

“The historic preservation of all the ornate plaster and paint work was critical from a waterproofing standpoint,” says Jack Moore, president and CEO of LaGrange, Ohio-based West Roofing Systems Inc., which has handled all of the SPF installations for the nonprofit. “Our partnership with Playhouse Square over the past 35 years, utilizing SPF roof systems, has contributed tremendous success to the preservation of these national treasures.”

The process of reviving the district was a slow one. The Ohio Theatre was restored and reopened in 1982, followed by the State Theatre in 1984 and the Connor Palace in 1987. Playhouse Square then turned its sights on the two remaining original theaters, taking control of the Allen Theatre in 1997 and then purchasing the Hanna Building and Annex, which housed the Hanna Theatre, in 1999. Encompassing approximately 480,000 square feet, the Hanna Building and Annex are named after the late Ohio Sen. Mark Hanna. The Hanna Theatre has resided in the Annex since its 1921 opening; the rest of the complex was originally designed as office and retail space. The still independently owned Hanna Theatre, unlike the other four original venues, had remained open until 1989, when it closed. Because of strong sentiment for the venerable theater, it reopened in 1996 but was in need of substantial rehabilitation when the Playhouse Square nonprofit took ownership three years later. 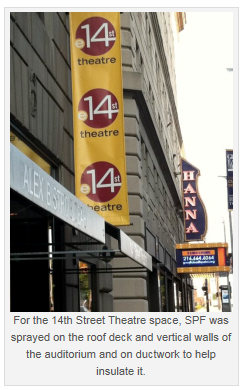 Part of the non-profit’s approach to rehabbing the district was the introduction of additional smaller venues, including the Helen Lab Theatre, Kennedy’s Cabaret, Outcalt Theatre and the Westfield Insurance Studio Theatre, and encouraging the establishment of new restaurants, retail and offices in area. Taking ownership of the Hanna Building and Annex provided the nonprofit with the opportunity to restore another of the district’s gems and help continue to diversify the area’s amenities. That included the 2002 opening of the 14th Street Theatre in a former restaurant space attached to the main Hanna Building. Once the historic Hanna Theatre in the Annex was restored and reopened in 2008, the nonprofit turned its attention to the 14th Street Theatre space and began a much-needed renovation of the venue. The renovations began solely to rehabilitate the 14th Street Theatre space, but the job expanded to tackle roofing issues for the 14,000-square-foot section of the Hanna Building that housed it; the roof was in need of new insulation and upgrades were needed to address waterproofing.

Similar to renovations and restorations undertaken in the district in decades prior, Playhouse Square again sought an effective and durable solution that wouldn’t break the project budget. In 2012, representatives again turned to SPF, citing its high performance through the years. Based on the earlier use of SPF for the other theaters in the district, Playhouse Square knew it could help decrease heating and cooling costs and not change the historic character of the building. SPF’s versatility as an insulation and a sound barrier also made it a great choice for the clerestory structure and large auditorium. Additionally, SPF’s flexibility was critical for working around bulky mechanical units, ductwork and visible conduit chases, in addition to exposed piping and masonry.

“You have things that are installed on the roof over the years, which you cannot remove, when you are applying insulation,” notes Carl Dettlebach, facilities manager for the Playhouse Square non-profit. “We felt because of [West Roofing Systems’] ability to target install you’d get a better seamless installation. The seamlessness of it is more reliable and stronger. In another building, we had a membrane roof that was released from the building during Hurricane Sandy. None of our spray foam roofs were damaged in that storm.” 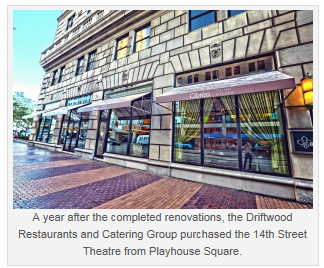 For the SPF roof installation on the 14th Street Theatre, West Roofing Systems used a rigid, closed-cell spray polyurethane foam. High-density spray foam is primarily used in roofing applications, and this closed-cell, high-density SPF is what has been used time and again on the Playhouse Square buildings to provide compressive strength to the roof. In the 14th Street Theatre space, SPF was sprayed on the roof deck and vertical walls of the auditorium and on ductwork to help insulate it. The installation even went on to win an award in 2013 from the Spray Polyurethane Foam Alliance for its sustainable and environmentally responsible construction practices. The Playhouse Square association is happy with the results.

“The spray foam has increased the R-Value by a factor of six,” Dettlebach explains. “We’ve got about 2 inches of foam on the roof, and that’s an R-Value of six per inch, so that’s the equivalent of applying R-12 to the roof.”

An Encore for 14th Street Theatre

A year after the completed renovations, the Driftwood Restaurants and Catering Group purchased the 14th Street Theatre from Playhouse Square. With a few cosmetic modifications, such as incorporating more stonework and wood to heighten the ambiance, Driftwood Restaurants and Catering Group successfully transformed the space into the restaurant Cibrèo and a private event space while retaining the distinguishing aspects of the theater, from the stage to the lighting. 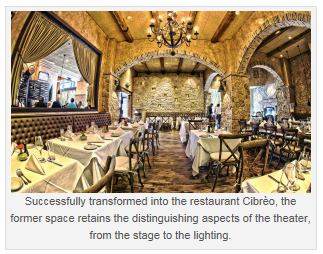 “The opportunity to bring in Cibrèo and their business plan and operate a special event space was a cost-effective addition to the space,” Dettlebach says. “We work with our tenants as partners. This was a better plan to utilize the space.”

And the Driftwood Restaurants and Catering Group could not be happier with its new location in the Hanna Building nestled among the thriving theater district.

“We realized that Playhouse Square wanted to grow more and become more of an entertainment district, so, as a company, we wanted to be part of that growth,” adds Shawn Tatarowicz, assistant operations manager for Driftwood Restaurants and Catering Group. “We just fell in love with the spot, it’s a great space. We made the 14th Street Theatre a private room, it seats up to 175 people.”

Thanks to the renovations and SPF, the new owners can enjoy the improved building envelope. They can also feel confident that diners will enjoy the repurposed space in comfort for many years to come.

Tatarowicz notes: “It’s a pretty sound building, all the work that [Playhouse Square] did. Just the history of it and being part of Playhouse Square, it’s been huge. It’s a great partnership with Playhouse Square and with Driftwood. Every time people walk in, their breath is taken away by the space and everything that’s been done.”