You Say You Want A Revolution

It’s transparent, it’s self-cleaning, and best of all, it’s incredibly versatile. And despite the fact that it will be lauded in November at a 25th-anniversary fete in Germany, the fluorocarbon-based polymer ethylene tetrafluoroethylene (ETFE) is probably not a material that most people are familiar with. However, that’s all about to change.

Today, thanks to the innovative engineers and creative architects involved in the structures being showcased for the 2008 Olympics in Beijing, China, the unusual properties of ETFE are about to get their moment in the international spotlight. And as a result, more traditional transparent materials, like glass or fiberglass, may have some serious competition for projects where natural light considerations are a critical design component.

The resin is unique in many aspects. It can be manufactured into a thin film, stored in rolls, and designed for application in sheets or even inflated into pillow-like units of varying size, shape, and color.

A typical three-layer system consists of two layers measuring 250 microns thick and one layer roughly 200 microns thick. “If you put your fingers together, it would still slide between,” notes Foiltec North American Division Project Manager Nathan Brekker of the product his company pioneered. But things get really interesting when air is added in between both the first and second layers and the second and third layers. Barely measurable with a ruler when deflated, the material expands to create a structural barrier several feet in depth.

Though its added benefits include energy efficiency, cost effectiveness, and surprising durability, it’s the light weight and delicate appearance of ETFE that offer never-before-seen design opportunities.

Nicknamed the Watercube, the 750,000 square foot National Aquatic Center in Beijing, China, is the largest ETFE project to date and showcases the material’s ability to bridge the gap between fantasy-like, futuristic design and reality. Scheduled to be completed by the end of the year, the project gives the appearance of a box made of bubbles by utilizing blue-tinted ETFE cushions not only in the roofing structure, but in all four walls as well.

In stark contrast, less than 500 meters away is the National Stadium, an intricate woven configuration of steel girders laced with red-tinted ETFE cushions. Much like a bird’s nest, the structure projects the appearance of a sturdy, safe haven. Underscoring the appeal is that the systematic design is tinged by random, seemingly natural inconsistencies that are possible only because of the light weight and versatility of ETFE.

Back to the future
Though it’s taking a swimming arena crafted from bubbles and a stadium resembling an enormous nest to bring attention to the material, especially in the U.S., ETFE has been used in European mainstream projects with simple architecture like medical facilities, office projects, and zoo structures since the 1980s.

It all began in the 1970s when DuPont created the chemistry behind the product, (which is a unique form of their more mainstream Teflon property) as insulation material for the aeronautics industry. It was then that German-based Stefan Lehnert, a passionate sailor and mechanical engineer to boot, came across the technology in his quest to create a new type of sail. Because the resin of the material could be spun into a durable thin film with the ability to expand and contract, Lehnert began experiments hoping to revolutionize his pastime. Though that use eventually proved to be inappropriate, he recognized that ETFE’s transparency and versatility had great potential in other applications. 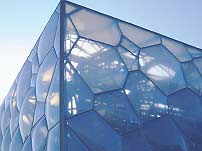 In 1982, Lehnert founded Bremen, Germany-based Vector Foiltec as he sought to bring the technology into the building material arena. Eventually catching the attention of architects for an atrium application, the product was first put to use in a pavilion roof of a Holland zoo. Gaining credibility over the next decade, ETFE was also used in a variety of roofing applications throughout Germany and England. Eventually, in 2000, the use of ETFE in two enormous conservatories as a part of a British environmental complex called the Eden Project brought attention to the product’s engineering potential.

Now, the world is apparently catching on to the possibilities of ETFE. Not only did three out of the four proposals for the Beijing Aquatic Center contain ETFE, but several of the submissions for London’s 2012 Olympics also integrate the material. In fact, Foiltec, which has offices in 12 locations around the world, is working on more than 100 projects and is focusing on expanding its U.S. presence. Already, eight applications are slated for next year. To date, simply designed gable roofs in aquatic places, tennis facilities, and arenas make up the majority of stateside interest, but indoor rain forests, indoor waterparks and facilities requiring a natural habitat with sunlight all year can also benefit from the application.

On the plus side
Weighing in at roughly one percent of the weight of glass, no one can dispute the reduction in structural costs associated with implementing ETFE. Though savings vary by job and the level of complication, using ETFE can reduce costs anywhere from 10 percent to 60 percent. “Even in a simple roof structure, the benefit over glass is in the span,” says Brekker recalling a recent project with 33 panels, all 8 ft wide. “The panels were 50 ft long, so that is 8 ft by 50 ft with no structural support in the middle. With glass you need support every 8 or 10 ft, so this cuts down on your steel costs.”

The material can be produced in a variety of shapes, sizes, colors, finishes, and even patterns to answer a variety of architectural considerations, light transmission needs, and general

The material, which is typically pre-stressed to inflate and take loads optimally, can stretch up to three times its original length. Surprisingly, it’s also puncture resistant. In hurricane testing the company shot 2x4s into the material at a high velocity. In most instances, the board didn’t blast through but was caught up somewhere in the layers.

As is the nature of the plastic, when exposed to fire, ETFE only melts and pulls away in spots where the flame is in direct contact —which reduces the risk of a fire spreading across the material. Only exposed areas would require replacement. For smaller tears, patching is often all that is needed. A sticky-sided tape that is essentially made from the same material can be applied and is virtually invisible. And in a true testament to its environmental appeal, ETFE is considered recyclable since the material and be melted and used again.

Nobody’s perfect
Although the benefits seem to outnumber the concerns, ETFE does possess some characteristics that the builder should keep in mind. With its layered structure, a continuous stream of air pressure is necessary to maintain stability. In order to facilitate the infusion, an air-supply hose is connected to the cushions and integrated with other lines into a computerized pressure monitoring system.

It’s this system that enables the lightweight material to bear a more impressive load than glass could. “Because there is a constant regulated air supply, when it reaches a maximum air pressure, the system automatically shuts off,” says Brekker. “But if a large gust of wind presses down on the top foil, instead of bearing all the stress on the outside layer, the design disperses the pressure by spreading the force of a wind or snow load, across all three layers evenly,” acting much like a shock absorber. A bleeder valve automatically releases air.

Despite its strength, ETFE can be cut through with, for instance, a sharp knife. For this reason, the product is generally not used in windows or on exterior walls unless a foundation is created roughly 15 ft off the ground.

Other challenges arise from acoustics. Though the sound of rain pattering on a roof may conjure up a cozy feeling for some, it could be difficult to settle in with a good book under an ETFE roof structure. The cushion system, in effect, acts like a drum and can intensify noise levels dramatically. And when it is used in an interior application, more sound is transmitted than with glass or even wood construction, so privacy can be an issue.

Although the material is capable of adapting to complex environmental and architectural pressures, it’s still best to assess the motivation behind incorporating ETFE before automatically ruling out other products. Be sure to consider transparency, energy efficiency, and architectural design needs. In general, Foiltec recommends avoiding the resin in residential applications. But more innovations may be on the horizon. The company confirms, among other things, it is exploring ways to boost thermal properties and absorb noise.

Lisa Marquis Jackson is a freelance writer based near Dallas, Texas.