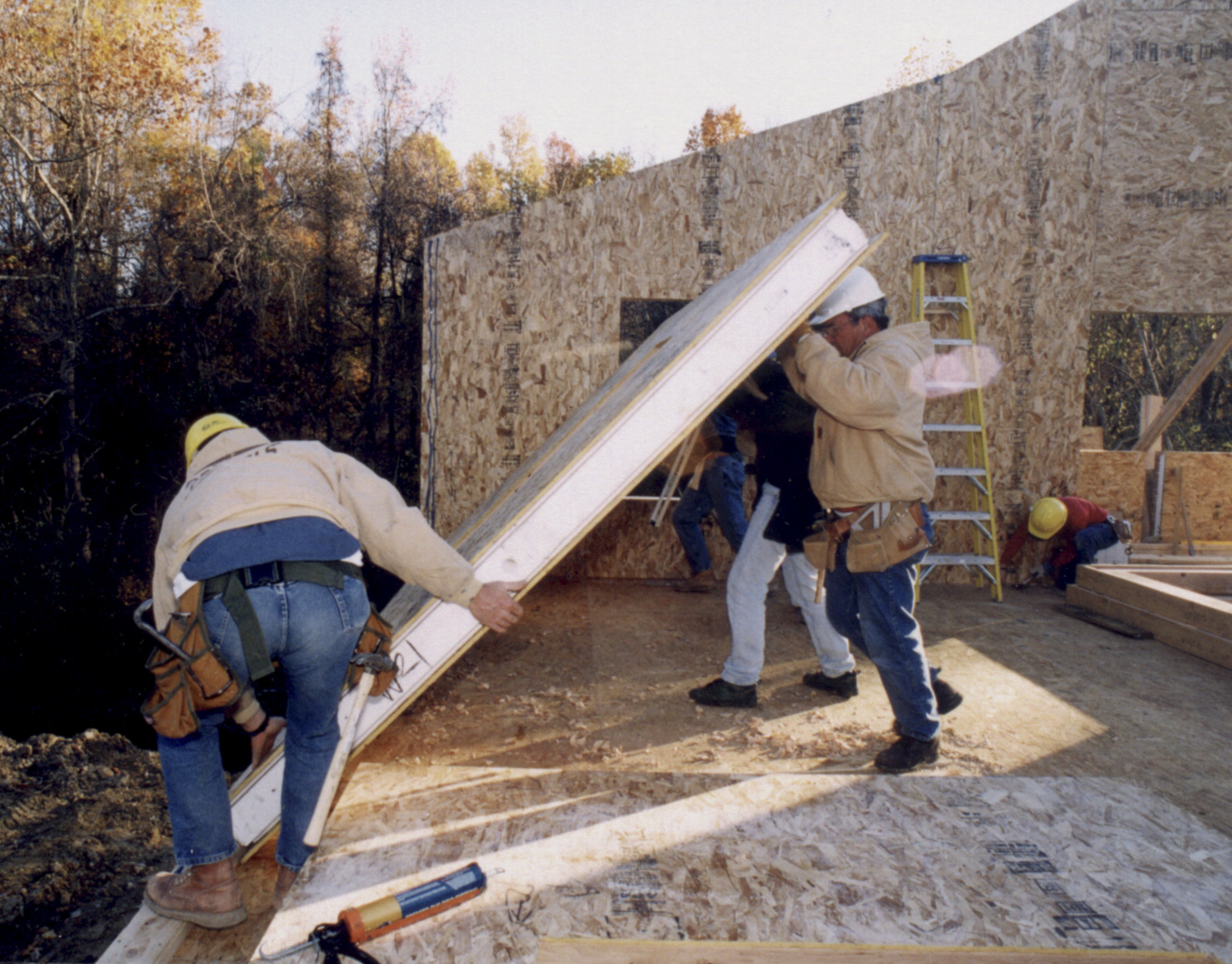 Cutting Energy Down to Zero

Although often overlooked, U.S. homes account for 15 percent of the nation’s energy use. As such, the Department of Energy’s (DoE’s) Building Technology program has made its goal to reduce residential consumption through the development and market adoption of the zero-energy home (ZEH) concept.1

ZEHs produce as much energy as they consume—a quality depending heavily on foam plastic insulation building assemblies, such as structural insulated panels (SIPs), to form an airtight building envelope that cuts energy used for heating and cooling. Relying on both plastics and traditional building materials, the combination of SIPs and other energy-efficient technologies brings the ZEH concept closer to the mainstream than many design professionals might think.

Plastics can be an important part of these zero-energy homes, as they only result in the use of about five percent of all fossil fuels, according to 2005 information from the Energy Information Administration.

Conceptual ZEH development
Hand in hand with the zero-energy concept is the successful integration of energy-efficient technologies and renewable energy sources. Roof-mounted photovoltaic (PV) arrays convert sunlight to energy that can be used in the home. During off-peak hours and during ideal, sunny conditions, these PVs produce more electricity than necessary. The excess is sold back to the local utility through the grid and credited to the home’s account to purchase energy during peak times or at night when consumption exceeds generation.

These homes have the potential to significantly affect energy consumption across the nation if the concept can be readily and affordably incorporated into the U.S. housing industry. The DoE recognizes affordability is the primary hindrance barring the widespread acceptance of ZEHs. For this reason, it sponsors continuing research and development, and implements tax credits for PVs and ‘whole-house’ energy savings under the Energy Policy Act of 2005 (EPAct 2005) to make energy-efficient homes an economical option for builders and homebuyers.2

Photovoltaic units account for a large portion of the incremental cost of a ZEH versus a conventional home. In recent years, these arrays have become increasingly more efficient and economically justifiable, but the price still hovers around $6500 to $10,000 per kWp.3 Due to the high costs of photovoltaics, ZEHs must rely heavily on a high-performance building envelope and other energy-efficient technologies to reach the goal of net-zero energy use.

In other words, ZEH is not a single technology, but rather an assembly of integrated systems carefully specified to achieve cost-effective energy savings. An airtight envelope and other technologies can reduce home energy use by approximately 70 percent, leaving the remainder of energy savings to be supplied by a small PV system.4 (Savings may vary. Suppliers should be consulted to understand the energy trade-offs.) 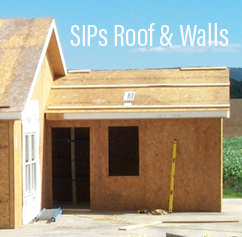 from 98 to 241.5 m2 (1056 to 2600 sf), were built as part of a Habitat for Humanity subdivision and designed with construction costs suitable for the non-profit organization. ORNL specified structural insulated panels for walls and roofs in all five homes; this decision was based on the performance of structural insulated panels in ORNL tests of whole-wall R-value and air tightness for various wall assemblies. In 1996, ORNL began studying the whole-wall R-values of more than 400 wall assemblies.

Whereas insulation R-values measure the thermal resistance of insulation in a cavity, whole-wall testing gauges the insulating ability of an entire wall section, taking into account the thermal bridging of studs and other structural members in the walls. As much as 45 percent of a home’s energy use is for heating and cooling, making a well-insulated building envelope a critical ZEH component. 5 SIPs are composed of a rigid foam core of insulation sandwiched between two structural skins. Different core materials can be used, including expanded polystyrene (EPS), polyurethane, polyisocyanurate (polyiso), and extruded polystyrene (XPS). All these materials provide high levels of insulation and are entirely consistent within the panel, interrupted by minimal framing lumber. SIP skins are typically made of oriented strandboard (OSB), but can also be made of other materials for specific applications.

SIPs derive their structural properties from the skins and their laminated construction, meaning they can be assembled with 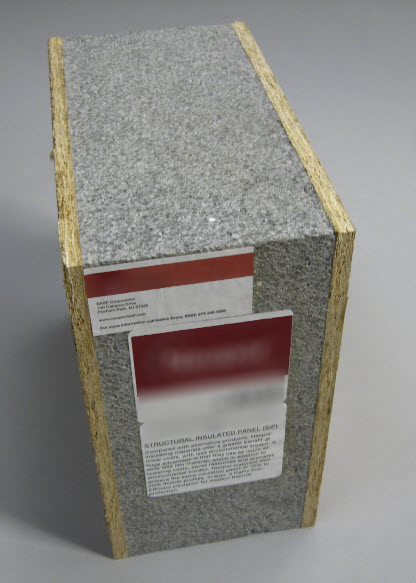 In the ORNL tests, the advantages of consistent foam insulation in SIPs showed a clear advantage over stud-framed walls. A wall with R-19 fiberglass insulation and 2×4 studs 406.4 mm (16 in.) on center (oc) tested at R-9.6 in ORNL’s rotatable guarded hot-box apparatus in accordance with ASTM International C 236, Steady-state Thermal Performance of Building Assemblies by Means of a Guarded Hot-box.

A 114.3-mm (4.5-in.) SIP wall with 0.131-kg/m3 (1-pcf) EPS insulation measured at R-14. With conventionally framed homes subject to sizeable energy loss through thermal bridging, advanced foam insulated building systems such as SIPs or insulated concrete forms (ICFs) play an important role in the development of ZEHs (although individual performance may vary).7

In addition to requiring high R-value insulation, a functional ZEH needs the building envelope to be effectively sealed. Air infiltration can have an extremely detrimental effect on energy efficiency, with convective loss accounting for as much as 30 percent of a home’s heating and cooling expenses.8

“When you are talking about high-performance homes even approaching zero energy, you’ve got to have airtightness,” says Jeff Christian, ORNL director of the laboratory’s Building Technology Center. “It is easy to get an airtight envelope with SIPs because you can measure the final airtightness of a house with SIP walls and roof prior to installing drywall.”

Establishing an air barrier can be simple and effective with OSB rated at 0.9 perms laminated on both sides of the panel.9 OSB-faced SIPs can be manufactured as large as 2.4 x 7.3 m (8 x 24 ft), with far fewer joints to seal than conventional framing. The U.S. Environmental Protection Agency (EPA) recognizes this advantage of SIP homes and does not require a blower door test to check for air leakage to achieve qualification for the Energy Star program.

According to Sam Rashkin, the national director of Energy Star for Homes, “a SIP house has less cracks, less joints, and less complicated interfaces between conditioned and unconditioned spaces, and is dramatically easier to make tight.” 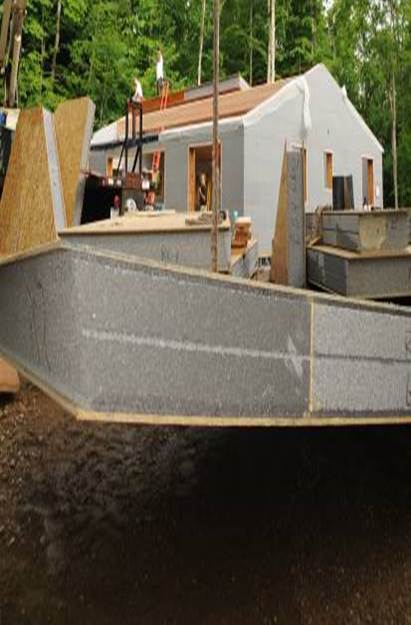 Joints between panels are sealed with insulated splines, SIP sealing mastic, and/or expanding polyurethane foam at every edge where panels meet. A specially designed self-adhesive SIP tape is available for application to interior roof joints to reinforce the seal and prevent the intrusion of warm moist air from the interior into panel joints.

Tests in ORNL’s large-scale climate simulator of a small 3.3 x 3.3-m2 (10.9 x 10.9-ft) SIP room showed it to be 14 times tighter than an identical room with 2×6 framing, batt insulation, and sheathing.10 While performance may vary, the low air infiltration test results capable with structural insulated panels were replicated in the ORNL zero-energy homes and contributed to their energy savings.

Each Oak Ridge home underwent a blower door test before completion to measure airtightness. The natural infiltration rate in these houses is less than 0.1 air change per hour (ach), while other conventional frame homes of similar size built by the same Habitat for Humanity affiliate ranges from 0.2 to 0.25 (see Table 1, page 11).

Energy savings
Each ZEH built by ORNL used a different combination of energy-efficient technologies. All five homes used either 114 or 165-mm (4.5 or 6.5-in.) SIP walls and a SIP roof of 165, 203, or 254 mm (6.5, 8, or 10 in.) thickness. Photovoltaics ranging from 1.98 to 2.2 kWp provided the homes with renewable energy. Other energy-saving equipment used included high-efficiency windows, HVAC, appliances, and lighting. Two homes used a geothermal heat pump, four relied on a heat pump water heater, and one employed a solar water heater.

Oak Ridge scientists installed between 30 and 80 sensors in each home to monitor energy use for the first year of habitation. The occupants were given basic direction in energy-saving measures and were free to operate equipment in the house as they wished. Results from these homes resemble real-world conditions for future ZEHs (Table 2). The homes were serviced by the Tennessee Valley Authority (TVA) at a local rate of $0.068/kWh and were able to sell all the solar power back to the utility at $0.15/kWh. The first four homes (data for ZEH 5 was unavailable at the time this article was written) had average energy costs between $0.75 and $1.00 a day, falling short of net-zero energy, but achieving significant energy reductions and taking a major step towards achieving the goal of zero energy by 2025.

ZEH 4 was the most efficient home, despite being one of the largest. The The 111.5-m2 (1200-sf) home features a walk out basement of polyiso T-mass foundations and more doors and windows than the smaller homes. ZEH 4 used only 9934 kWh the first year, amounting to $275 in annual utility costs or an an average of $0.75 daily. The highly efficient SIP building envelope cut heating and cooling costs to $0.49 daily.

Although the concept of a net-zero energy home is now feasible, the high costs of PV arrays keep the goal of zero energy slightly out of reach for the average homebuyer. This year’s Energy Value Housing Award (EVHA)-winning home, by Anderson Sargent Custom Builder LP, used net-zero energy at a construction cost of $171/sf. The home used 8 kWp of PV array and sold for $1 million.11 In comparison, ZEH 4 was constructed for $93/sf. 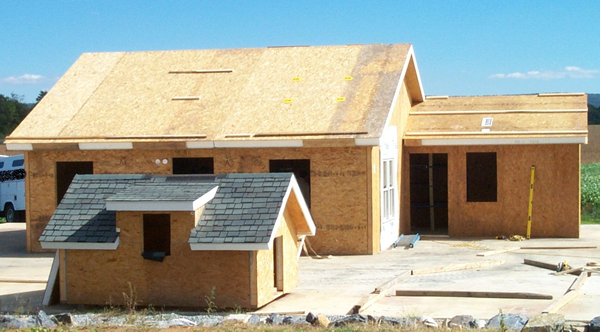 A recent survey conducted by the National Association of Home Builders (NAHB) Research Center showed 83 percent of homebuyers would be willing to purchase a ZEH if the utility savings offset increased mortgage payments.12 The NAHB Research Center claims it would be possible to produce ZEHs to meet such a buyer requirement, assuming research and development continues to lower the costs of PVs and if federal or state governments offer a 30-percent tax credit on photovoltaics similar to EPAct 2005.

Structural insulated panels and other highly efficient plastic insulation products play an important role in the nation’s energy state. The concept of zero-energy homes is impossible without the enabling building envelope. Whether used in ZEHs or simply to increase the efficiency of the average home, multifamily structure, or commercial building, SIPs can help reduce energy consumption and push the United States toward a sustainable future.

Chris Schwind is the communications manager for the Structural Insulated Panel Association (SIPA). He can be reached via e-mail at chris@sips.org.

1 The program works in partnership with states, industry, and manufacturers to improve the energy efficiency of the nation’s buildings. Visit www.eere.energy.gov/buildings.

7 For more on ICFs, see Vera Novak’s “Pushing the Energy Envelope with ICFs”.

8 For more information, you can visit www.nyswda.org