The Specifier’s Guide to Vinyl Fencing 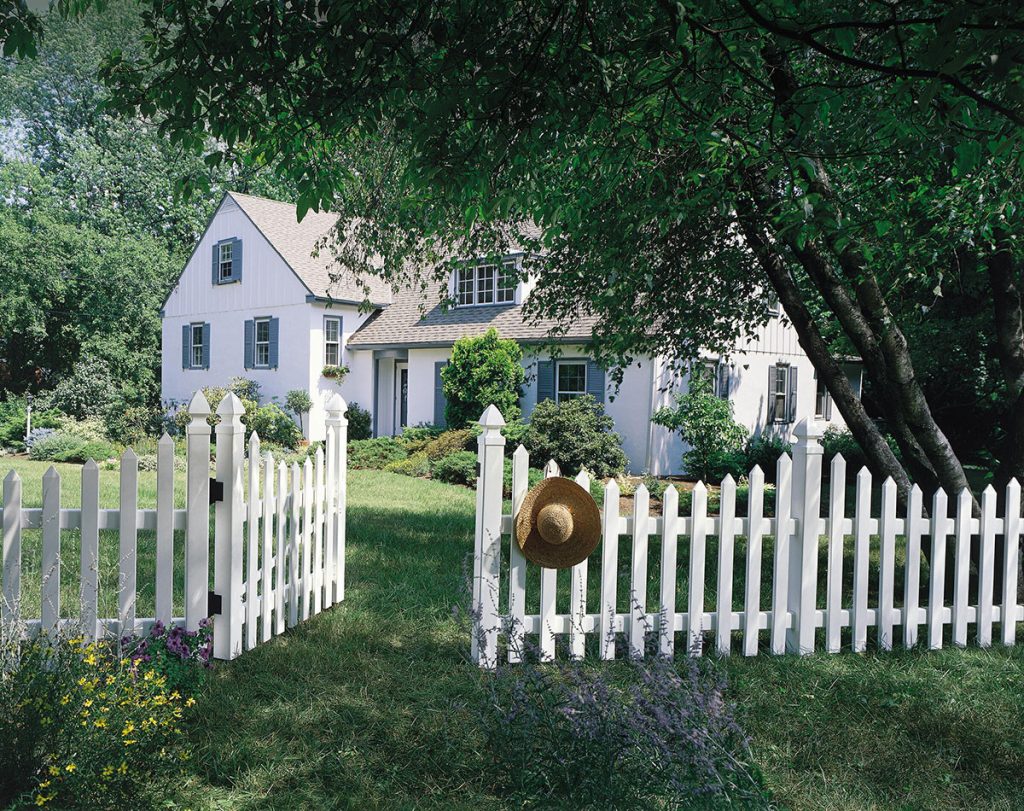 Many have faced a fence renovation project where classic and traditional style is critical, but the expense and time involved in maintaining the system requires more modern specifications. There are many weather-worn perimeter fences riddled with termite tunnels and chipped paint and link fences that are rusted and displaying battle scars. The average fence made from traditional materials will likely be showing its age after a few years, begging for a serious overhaul, if not a replacement. No fence is immortal, but some materials can get a little closer than others.

Vinyl has a lot to offer to remodelers as a replacement fencing material. It comes in a variety of popular styles and colors, which are added in the manufacturing process, rather than being merely painted on. Since color is consistent throughout a piece of vinyl, scratches will not show like they would on painted wood or metal. Other additives and modifiers from the manufacturing process give vinyl fences impact resistance, durability, and protection from ultraviolet (UV) rays. Indeed, since its introduction to the fencing industry in the 1980s, vinyl has significantly grown as an alternative to traditional materials. It is visually appealing and can possess the strength and durability to perform well in outdoor applications, such as fencing, railing, and decking. Additionally, vinyl is an engineered product tested to perform consistently. (These attributes can be understood through a look at vinyl’s complex manufacturing process—see “Baking Vinyl Cakes.”)

As a fencing option, vinyl can often stand strong against weather conditions where more traditional fencing materials may falter. Vinyl is resistant to termite infestation, does not splinter or discolor, and only requires occasional cleaning. Additionally, vinyl does not rust or corrode like certain traditional fencing materials and is less susceptible to denting or crimping. Since it has no exposed hardware, there is not as much opportunity for possible snags and cuts on passersby.

Tests and measures
While vinyl can have a higher initial cost than other fence materials, it tends to last longer and require less maintenance over the years—in other words, this higher up-front price usually evens out quite quickly. For renovation work, vinyl has an important advantage because vinyl can endure harsh conditions and not need replacement in a few years. Still, vinyl is not impervious to all elements—while it is largely weather-resistant, certain climates can put heavier wear on the material. Regions experiencing frequent below-freezing temperatures may cause some vinyl fences to become brittle and crack.

Most problems with vinyl fences, however, can be minimized by doing extensive manufacturer-specific product research. The higher the quality of the vinyl, the more likely it will perform well in many environments. Most landscape architects, and others responsible for specifying products for fencing projects, are familiar with ASTM International’s nine testing methods designed to rate the quality of vinyl. Each demonstrates how well a particular company’s vinyl product performs when put in contact with threatening outside forces. (See “ASTM and Vinyl,” page 28.)

Installation advantages
Vinyl used to make fencing systems must also comply with appropriate local, regional, and national codes. Since fences are used in various ways, there is no national standard applying to all fencing applications, except in the case of fences built around swimming pools. (Updated information on these regulations can be found in the 2005 International Building Code [IBC] Manual.)

When weighing all the pros and cons of a particular fence intended for a renovation project, one should not forget to consider its installation needs. A well-designed fence that is easy to assemble will improve any landscaping rejuvenation project by minimizing unforeseen problems during installation. With level terrain, most experienced crews will find that once postholes are bored, putting up a vinyl fence is akin to assembling Tinker Toys™. Even on sloping terrain, relatively easy modifications can often fulfill the desire for structural and aesthetic success.

Over the years, vinyl has earned its place as a respected fence material in renovation work by becoming stronger, more durable, and more visually appealing. New composite fencing often looks like assemblies made of traditional materials, but these hybrid systems can be much lighter and require less maintenance.

Allison Barlaz is director of sales/marketing/business development for CertainTeed’s fence, rail, and deck division. She holds an MBA from Insead, a business school outside of Paris, France, an MS in operations research from UC Berkeley, and a dual BA/BS in systems engineering and economics from the University of Pennsylvania.

Baking Vinyl Cakes
The compound used in vinyl fencing is polyvinyl chloride (PVC), which is derived from two simple ingredients: petroleum and salt (i.e. sodium chloride). Manufacturing begins when petroleum or natural gas is heated to create ethylene via a process known as ‘cracking.’ At the same time, the salt is put through electrolysis to extract the chlorine from the compound. The ethylene and chlorine are then combined to make ethylene dichloride, which is put through another cracking process to yield vinyl chloride monomer (VCM) gas. These vinyl chloride monomer (VCM) molecules are combined with each other through polymerization, producing vinyl resin—a fine white powder resembling flour.

Vinyl resin not only looks like flour, but it also shares a similar property in that it is made into many different bigger and better things when mixed with other ingredients. Manufacturers combine the vinyl resin with selected additives and modifiers to create a prime plastic. Due to vinyl resin’s physical similarities to flour, this combination is sometimes referred to as the ‘cake mix,’ with the finished vinyl product as the ‘cake.’ One of the modifiers combined with the vinyl resin is titanium dioxide, which serves as a sun block, as it helps protect the vinyl from the harmful UV rays it is exposed to in exterior settings. Pigments, such as titanium dioxide, are also added during this step to give the end-product a specific color. Finally, impact modifiers are added to the mix to increase the vinyl’s strength and flexibility—necessities when vinyl is being employed in outdoor fencing. Impact modifiers also make vinyl resistant to the usual dings and dents occurring during and after installation. Without the impact modifiers, a vinyl fence would be brittle, and could easily crack or break upon impact.

The next step in the manufacture of vinyl fence is extrusion, of which there are two methods: monoextrusion and co-extrusion. The former is the original method of polyethylene transformation and involves the pushing of the vinyl resin through a heated barrel and die by two large, precisely tooled screws. As the extruded vinyl form passes through a cooling tank, it is cut into predetermined lengths.

Co-extrusion, the most advanced and most used method, takes the process a step farther by feeding two streams of vinyl into a single die. This enables two different formulations of additives to be selectively fed into a single layer (i.e. the substrate) and an outside layer (i.e. the capstock) of the resin compound.

While co-extrusion is the preferred method by many vinyl fence manufacturers, some companies still tout the original technique as superior, because of the resulting 100-percent virgin vinyl. Nevertheless, it must be understood that co-extruded vinyl is no mere laminate or veneer product—the process actually forges a molecular bond, where the capstock and the substrate are formed together as one solid from two liquids. A big advantage of co-extrusion’s double-layered polyvinyl chloride (PVC) is the capstock layer is afforded additional UV protection, while the substrate layer receives more impact modifiers, to provide the vinyl fence with further strength and flexibility.

Some distinctively shaped vinyl fence parts are produced through injection molding, rather than extrusion. This process takes the heated vinyl compound and injects it into a hollow, three-dimensional mold to form such items as post caps and pickets. Both these and the co-extruded parts are later assembled to make the final vinyl product.

ASTM and Vinyl
ASTM International has set minimum levels products must meet before they can be marketed as an ASTM material. Prior to specifying a fence for a renovation project, the design professional should see how the manufacturer’s vinyl fares in the tests described below:

Izod impact resistance (ASTM D 256)
This test directly measures the resistance of a notched vinyl sample to breakage when struck by a hammer.

Flammability (ASTM D 635)
Vinyl samples are scribed at 25 to 100 mm (1 to 4 in.) from one end of the sample, clamped in a horizontal position over a burner. The operator clocks the time in seconds for a flame to reach the 25-mm mark; when a vinyl specimen stops burning or reaches the 100-mm mark, the test ends. (The lowest possible rating is “less than five seconds.”) This test shows polyvinyl chloride polyvinyl chloride (PVC) does not burn easily. If lit, the flame quickly goes out.

Tensile strength (ASTM D 638)
This test measures the load per unit area required to pull apart a vinyl sample, gauging vinyl’s durability. The sample is loaded in tension parallel to its long axis until it breaks at the narrow middle portion. Yield strength, the measure of the minimum tensile load, is also calculated.

Deflection temperature (ASTM D 648)
This test determines the temperature at which deformation occurs in the vinyl material. A bar-shaped vinyl sample, approximately 127 mm (5 in.) long and 13 mm (0.5 in.) deep, is loaded with weights and heated in an immersion bath. When a measuring device indicates the vinyl material has deformed or deflected, an alarm sounds and the temperature of the water bath is recorded.

Coefficient of linear thermal expansion (ASTM D 696)
This measurement determines the vinyl material’s rate of contraction and expansion due to heat changes. The vinyl specimen is alternately exposed to hot and cold baths—the lower the number, the smaller the amount of deflection. The results of this test have to be factored into the design of the fence pieces to provide tolerance that anticipate normal expansion and contraction. For ASTM tolerances and requirements, temperatures range between –30 and 30 C (–22 and 86 F).

Ignition temperature (ASTM D 1929)
Known as the ‘flash ignition test,’ this indicates the lowest initial temperature of air passing around a specimen at which a sufficient amount of combustible gas is evolved to be ignited by a small pilot light. Polyvinyl chloride (PVC) requires a very high temperature to ignite, contributes no fuel to the fire, and remains burning only in the presence of other combusting materials.

Flame-spread and smoke-developed indexes (ASTM E 84)
These indexes are designed to provide a standard for comparing the burning behavior of the surface of an exposed building material, such as a wall or ceiling. The test determines the material’s relative burning behavior by observing the flame spread among the specimen.

Weathering (ASTM D 3679 and ASTM D 1435)
This test is performed outside in conditions resembling real use. Vinyl samples, at least 152 mm (6 in.) long, are hung outdoors facing south, in three widely different climatic areas: a hot, dry climate (e.g. Arizona), a hot, humid climate (e.g. Florida), and a temperate, northern industrial climate (e.g. New Jersey). Sites are at an angle of 45 degrees for a minimum of one year, or at an angle of elevation representative of the manufacturer’s normal installation requirements for at least two years. At the end of the test, the vinyl material must be free of any visual surface defects such as peeling, chipping, cracking, flaking, or crazing due to manufacturing conditions.

The Expanding Role of EPS in Construction