Hydronic radiant floor heating employs heated water flowing through tubes or pipes under the floor. The heated surface then functions as a radiator, warming a room and all objects and people in it. Photo courtesy: REHAU

Since the time of the Roman Empire, radiant systems have been used to deliver heat to buildings. One of the more recent modern examples involves Frank Lloyd Wright, who incorporated hydronic radiant heat into his designs in the 1930s. With the development of advanced materials in the 1960s—specifically PEX, or cross-linked polyethylene—this comfortable, efficient, and effective source of heat can be extremely reliable, durable, safe, and readily available.

PEX pipe is already used extensively in Europe for underfloor heating. In North America, the pipe is rapidly gaining popularity for a variety of plumbing applications, including radiant heat.

Hydronic radiant floor heating employs heated water flowing through tubes or pipes under the floor. The heated surface then functions as a radiator, warming a room and all objects and people in it. This type of heating can provide superior comfort and efficiency compared to traditional forced-air convection heating. The heating profile is much more uniform, meaning fewer cold/hot spots (Figure 1, next page).

Traditional piping systems were rigid and difficult to work with because of their weight and the need for fittings at every turn. They often require open flames for effecting the joining systems for radiant heating applications. These traditional materials can also be difficult to cut and/or require specialized equipment, and may take a significant amount of time and expertise to assemble compared to PEX piping systems, which can be assembled in do-it-yourself homeowner kits.

As such, it is no wonder PEX tubing is gaining in popularity for radiant heating installations. Besides easy manipulation, PEX is popular because:

Keith Peterson’s home is among the first few in the United States to achieve The Freedom Seal of Approval™—an industry supported, consumer-focused certification program for rating homes that are healthier, environmentally friendly, and super energy efficient. The Freedom Seal minimum energy-efficiency standards are based on the Residential Energy Model (REM) software for the U.S. EPA’s Energy Star® Home requirements.

PEX pipe facts and figures
PEX features a three-dimensional molecular bond created within the structure of the plastic, either before or after the extrusion process. Through chemical/physical reactions, manufacturers structurally modify the polyethylene chains, significantly improving performance on properties like heat deformation, and chemical, abrasion, and stress crack resistance. The resulting pipe has greater impact and tensile strengths, improved creep resistance, decreased shrinkage, and performs extremely well at high temperatures and pressures.

Standards for PEX pipe systems
Most PEX tubing is made according to ASTM International F 876, Standard Specification for Crosslinked Polyethylene (PEX) Tubing, ASTM F 877, Standard Specification for Crosslinked Polyethylene (PEX) Plastic Hot-and Cold-Water Distribution Systems, and Canadian Standards Association (CSA) B137, Thermoplastic Pressure Piping Compendium (refer to B137.5). All standards cover only outside, diameter controlled CTS-sized tubing of 3-mm to 51-mm (0.13-in. to 2-in.) diameters, SDR 9, and operating temperatures up to 82 C (180 F).

Radiation
Post-extrusion treatment starts by extruding polyethylene tubing with conventional equipment. This tubing is then exposed to low-level radiation to energize the molecules and make them to link to their neighbors. (Gamma radiation was the original method, but now electron-beam radiation predominates.)

Engel (peroxide process)
This process mixes peroxide with high-density polyethylene and feeds the mix into the extruder under high pressure. The die is heated to a high temperature where the cross-linking takes place because of a chemical reaction between the two.

Sioplas (silane) process
Pre-extrusion treatment consists of grafting a cross-linking agent—such as silane and a catalyst—to the polyethylene chain. During extrusion, the high temperature and moisture activate this agent, creating free radicals that link to other nearby polyethylene chains. Although this reaction is initiated during extrusion, the majority of cross-linking activity occurs at elevated temperatures when the tubing is placed in a sauna or immersed in water after extrusion is complete. 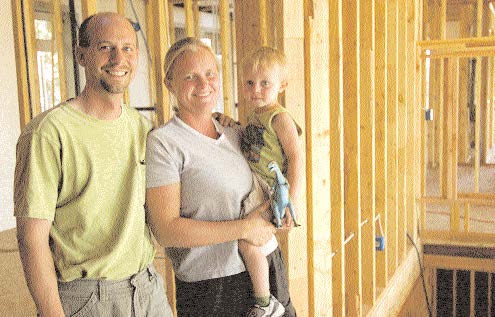 PEX pipe can be made with or without an EVOH (poly [ethylene vinyl alcohol]) oxygen barrier as an intermediate/outer layer. This barrier is sometimes required to minimize the oxygen transfer into a closed loop heating system, protecting boilers and other accessories.

Fittings and joining
A range of mechanical couplings, including compression, flare, and crimp ring, has been developed for PEX pipe joining. (They can be used because PEX’s cross-linking effects eliminate concerns about creep, cold flow, and stress crack.) PEX pipe is available in a variety of lengths, so no fittings are generally required for a continuous loop between the supply and return manifolds. This benefit translates into reduced installation time and cost.

Installing radiant piping
PEX tubing for radiant heating installations can be installed in new construction or retrofitted within existing structures. The pipe is typically installed in the floor, but tubing can be installed in walls and ceilings as well. The design of the system depends greatly on the structure and amount of heating required. A trained and certified installer can ensure the system performs at optimum levels and projected cost savings are realized. The hot water source for radiant heating is generally a separate boiler designed specifically for the job. On rare occasions, a residential hot water system is used to heat small areas, like a bathroom. 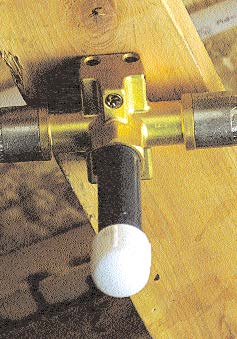 If you have a product that is built out of all renewable materials, but only lasts six years, then it is obviously not very sustainable,” says Keith Peterson, a senior research scientist at the U.S. Department of Energy’s Pacific Northwest National Laboratory. “Durability is a big factor that influenced the construction of this house.” 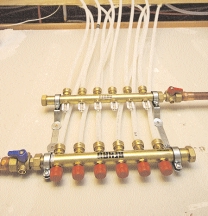 “PEX makes radiant practical. It does not corrode like some traditional piping materials. PEX can be less expensive and easier to lay out in loops because of its flexible nature.
— Gary Runyan, manager of product development engineering at Zurn

Most residential installations use 13-mm (0.5-in.) diameter tubing, while commercial and snow-melt systems employ 19-mm (0.75-in.) tubing. Supply and return lines are usually 19 mm to 25 mm (0.75 in. to 1 in.) in diameter. The water to various zones is supplied from a main line into a manifold system controlling the individual zones. This way, more or less heat can be directed to certain areas. The PEX tubing is laid out in continuous loops at spacings determined by the designer.

Incoming water is the warmest, so it is directed to the higher heat loss areas first. As the water circulates through the zone, it cools, so the last section of tubing before exiting is located in the lower heat loss areas. For example, most systems are designed to run the first—and warmest—part of the loop near outside walls and doors where heat loss is more prevalent. The loop then ends in the middle of the room (typically the warmest part).

The PEX pipe can be installed in flooring several different ways. For new construction, the tubing can be secured to reinforcing wire mesh or steel rebar. This is done every meter or so (3 ft to 4 ft), or as needed, using plastic or soft metal ties, with concrete or grout poured overtop. For suspended flooring, the tubing can be attached directly to the wooden subfloor with plastic clamps or special staples

The tubing can also be installed to the underside of suspended flooring, when necessary. After laying and securing the loops, the system should be tested to 689 kPa (100 psi) to ensure the tubing has not been damaged during installation (i.e. the connection to the manifolds has been properly assembled).

Conclusion
Easy to install and economical, PEX piping provides consistent, uniform heat. It is easy to see why radiant heating systems will likely gain popularity in the years to come. Eliminating forced air to heat a space can help do away with a lot of unhealthy dust and allergens. Homebuilders during the Roman Empire knew what they were doing

Camille George Rubeiz, PE, is the director of engineering for the Plastics Pipe Institute (PPI), and is a member of both the American Society of Civil Engineers (ASCE) and American Water Works Association (AWWA). He can be reached via e-mail at crubeiz@plasticpipe.org. Michael Ball has been PPI’s marketing manager since 2001, and can be reached via e-mail at mball@plasticpipe.org.